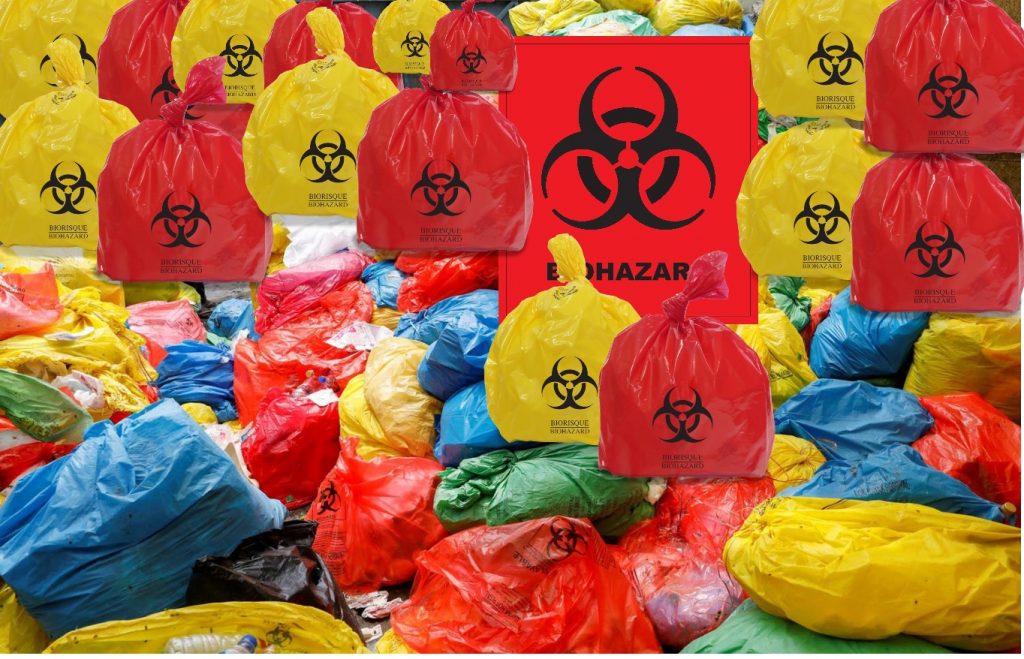 With the current pandemic situation, many countries across Asia have started to face the problem of disposing of hazardous medical waste. A large number of nations have devised new waste treatment plans and facilities or have scaled up their previous ones while on the other hand, some countries have resorted to the method of building deep burial pits for safe disposal of waste. Following is an exclusive report by Nikunj Sharma.

The entire world is continuously dealing and working on finding out the different ways to contain the spread of coronavirus. However, a bigger problem has surfaced as the countries are finding it difficult to deal with the deluge of hazardous and contaminated biological and medical waste.

The COVID medical waste is increasing with each passing day, which comprises discarded Personal Protective Equipment (PPE), which includes the gowns, googles masks, gloves, and other items that are used for treating the COVID-19 patients. Such an increment in the generation of medical waste is going to have an intense effect on the management practices of sustainable medical waste in the years to come.

As per the estimates of the Asian Development bank, it has been found that capital cities Manila and Jakarta of the Philippines and Indonesia have produced around 280 and 212 tons of additional medical trash, respectively.

Several reports from the Thailand Environment Institute have pointed out the fact that around 50 tons of infectious medical waste have been generated within the Thailand Medical centers since the outbreak of the Covid-19, which earlier were capable of effectively incinerating 43 tons of waste only.

At the moment, Environmentalists are highly worried about the spike in demand for plastic packaging product because of the pandemic. Also, the use of single-use items that requires plastic packaging has highly increased during this time.

In Wuhan, the place of origin of the novel Coronavirus, the authorities and the officials were forced to build new medical waste disposal and treatment plants along with deploying 46 new waste treatment facilities.

As per the reports, medical facilities and hospitals have reported a six-fold increment in the production of medical waste at the peak of the coronavirus pandemic.

Zhao Qunying, Head of Emergency Office at Ministry of Ecology and Environment in China, while addressing a conference said that a load of biomedical waste in China has increased by a margin of 600% during the pandemic. Earlier where 40 tonnes of medical waste was generated in Hubei Province, the epicenter of coronavirus, now generates waste of around 240 tonnes.

With the implementation of new waste treatment and disposal facilities in Wuhan, the capacity of treating waste has increased to over 263 tonnes, which used to be 50 tonnes earlier. A major transformation was observed in the overall waste management and infrastructure of the country as China executed nationwide measures and guidelines for dealing with medical waste. Following is the list of some measures implemented by China:

Furthermore, the firefighter has also been employed in order to ensure quick disposal of waste at the designated sites for safe disposal of the waste.

As soon as steady growth in the spread of coronavirus disease among the people was observed within the country, a large number of people began to see in hospitals, quarantine centers, and hence a tremendous increase in the generation of biomedical waste was observed as well.

The Central Pollution Control Board (CPCB) has directed all the healthcare facilities and hospitals in the entire country to maintain color-coded bins or containers within wards in order to carry proper and safe segregation and treatment of waste as per the 198 Common Biomedical Waste Treatment Facility (CBWTF’s).

Delhi-based Waste Management Expert, Swati Singh Sambyal, said that if the biomedical waste treatment and disposal are not carried out properly, then it may have unforeseen effects on the environment as well as the health of the people. Therefore, it is essential to handle and dispose of medical waste safely.

Furthermore, she said that though the segregation of waste is extremely important for effectively managing and disposing of waste, it is an extremely difficult task to achieve.

A certain guideline has been issued by CPCB, such as usage of double-layered bags, color-coded dust bins, and compulsive labeling of the bins in order to facilitate proper and safe disposal of waste generated during the diagnosis and treatment of confirmed and suspected COVID-19 patients.

The pollution monitoring body directs the hospitals, doctors and the other staff members to dispose the PPE’s like the goggles, plastic shield, hazmat suit, plastic coverall, and nitrile gloves into the red bag and things like used gloves, masks, shoe-cover, head-cover, non-plastic and semi-plastic coverall into the yellow bags.

Following the current data it has been found that the worst-hit state of India- Maharashtra generates the largest amount of medical waste, that is, 17.494 MT biomedical waste per day followed by Gujarat generating 11.693 MT per day and lastly Delhi generating 11.114 MT load per day.

Some states of India like Rajasthan, Tripura, Nagaland, Uttarakhand, Maharashtra, Himachal, J&K, Lakshadweep, Assam, Goa, and Arunachal Pradesh have adopted the method of burying the waste in deep burial pits.

Need for Improvement in Indonesia

Since the start of June month, the World Health Organization has been continuously supporting the Ministry of Health in conducting seminars on Management of Medical Waste in Indonesia.

The current Covid-19 pandemic situation has laid a severe impact on the Healthcare System as well as the Waste Management System of Indonesia.

As per the Indonesian Institute of Sciences, Covid-19 has negatively impacted the condition of water bodies (oceans and rivers) of Indonesia due to the increased generation of biomedical waste from hospitals and healthcare facilities.

As per the reports released in March and May 2020, a massive increase in the amount of biomedical waste comprising of intravenous lines, masks, syringes, and PPE kits was noticed due to the Covid-19 pandemic. The amount of waste generation hiked up from 13.6 tonnes to 23 tonnes.

The present Covid-19 pandemic situation has resulted in the increased release of discarded medical waste in Indonesia, which has posed problems for the medical waste management system of the country. There are many hospitals in Indonesia which

For instance, many hospitals in Indonesia are equipped with incinerators however, they do not have the appropriate permit for operating it. Also, efficient waste transportation and waste treatment services are yet not available for the entire country of Indonesia.

A marked rise in the generation of medical waste has been observed since the start of the pandemic. It was 17% in February at the start of the pandemic which was later witnessed at 27% in March during the Covid-19 outbreak as per the records of the Malaysian Ministry of Environment and Water. This in total refers to the generation of about 25 tonnes of Covid-19 biomedical waste per day.

The Penang City Council in Malaysia has displayed their concerns over the generation of an increased amount of medical waste every day. They have released a warning about the same, stating that if the condition continues to be the same and no appropriate action is taken against it, then the chances for the occurrence of an environmental disaster are pretty high.

Following the reports, it has been found out that almost 9,000 face masks are being disposed of in Penang on a daily basis.

Innovations have always been a man’s best friend. Innovations like the transformation of PPE kit into biofuel can be contemplated to be one of the best innovations for saving the environment from the long-term effect of dealing with the hazardous biomedical waste.

Following the study published in the Biofuels Journal, it has been found out that there are several items of the PPE kit which can be converted from plastic into biofuels state through the means of a high-temperature chemical process known as Pyrolysis.

If the aforesaid is done and properly executed at a commercially viable scale, then there are high chances of saving the world from the after-effects of hazardous biomedical waste generated as PPE kits.